Based on the findings, your physician will suggest the treatment method most suitable for the treated couple. We generally go from less demanding to more demanding methods.

The following methods can be used to treat infertility:

This involves monitoring the development of the egg using ultrasound and the subsequent administration of a drug that will release the egg from the ovary.

During the ovulation of the woman, the partner's sperm obtained via ejaculate processing is introduced into the woman's uterus through a special catheter. If necessary, donor sperm is used.

This method is not recommended in reduced spermiogram parameters and in case of infertility caused by immunological factors.

Currently, conventional fertilisation as a part of in vitro fertilisation is carried out minimally. This method has been virtually completely replaced by the ICSI method. 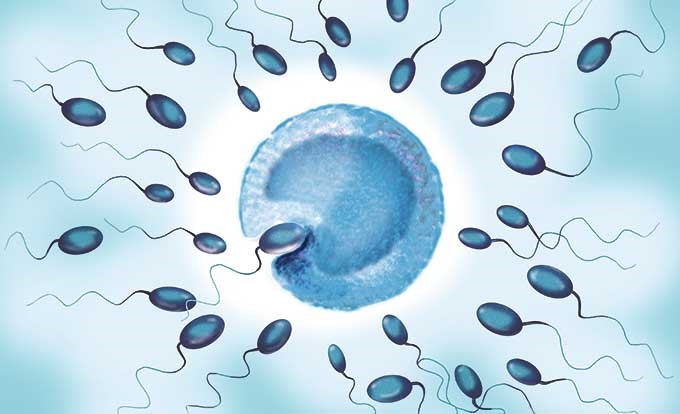 A sperm cell is selected under a microscope based on its morphological characteristics and motility in this method. This sperm cell is then introduced into the egg via micromanipulation pipettes. This increases the probability of fertilisation of the egg compared to conventional IVF. ICSI indications in general are reduced spermiogram values. However, ICSI is currently the dominant method for in vitro fertilisation and has virtually completely replaced conventional in vitro fertilisation. 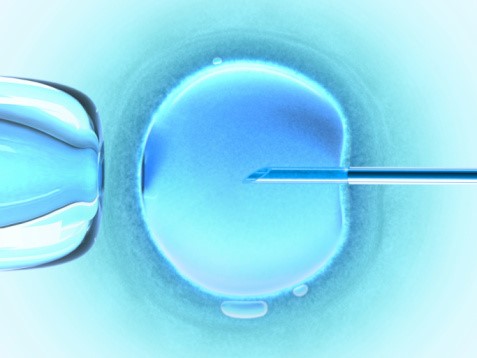 PICSI is a modification of the ICSI method – mature sperm are selected based on hyaluronan binding prior to fertilisation. This process simulates the binding of the sperm cell to the egg, which occurs during spontaneous conception in the woman's body (in vivo). Immature sperm do not have this ability.

A new non-invasive method to select sperm cells according to their functional state. MACS allows for the modification of a sperm sample to increase the chances of successful artificial insemination. Sperm cells with damaged DNA are captured and removed using this method.

Sperm selection chips offer an alternative, more gentle method of sperm processing for further use in assisted reproduction methods IUI, IVF and ICSI. Sperm cells selected in this way have better motility, morphology and are exposed with lower exposure to negative free reactive oxygen species. Above all, this method allows us to select sperm cells with the least damaged DNA. The use of such processed sperm for fertilisation of the egg increases the chance of acquiring a healthy embryo without genetic abnormalities. 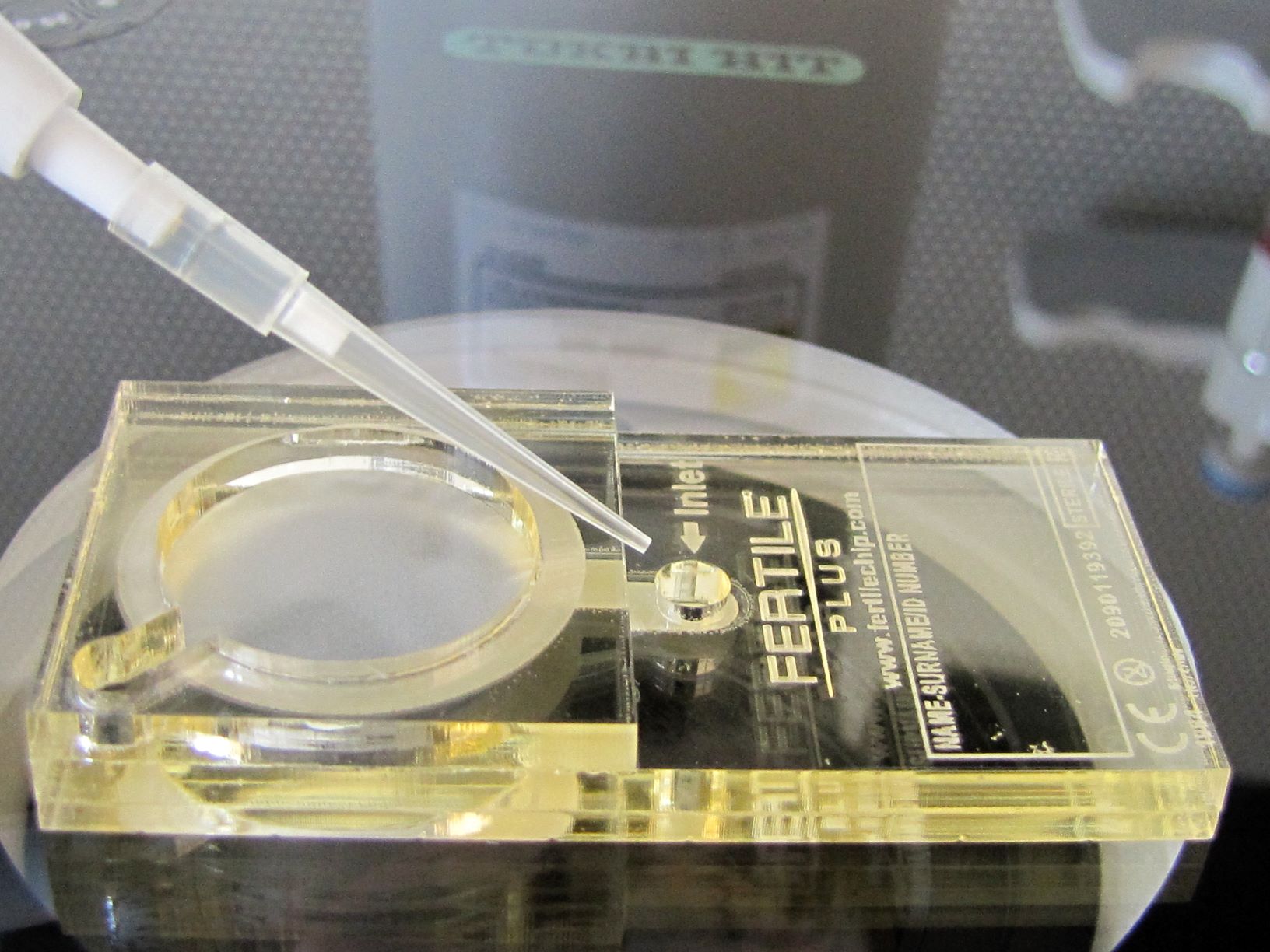 Prolonged embryo culture is the culture of embryos from the 8-cell stage to the blastocyst stage the embryo reaches by the 5th day of culture.

Prolonged culture mimics the course of natural pregnancy – in the first days after fertilisation, the embryo is transported using the ciliated epithelium of the fallopian tube to the uterine cavity, which is reached on the fifth or sixth day. Prolonged culture can be used as a method of selecting the embryo with the highest quality. Embryos in the blastocyst stage have a higher probability of implantation (nesting) in the lining of the uterine cavity.

The transfer of one selected embryo is currently the dominant trend, which is also supported by the reimbursement policy of health insurance companies.

The reason is the risk of multiple pregnancies, both for the mother and also for the newborns due to the significantly higher morbidity in multiple pregnancies. In the vast majority of e-SET cases, 1 blastocyst is introduced into the uterus on the 5th day of culture. The selection of the blastocyst with the highest quality can be performed using the PrimoVision/Geri monitoring system, which allows for continuous monitoring of the development of individual embryos.

The blastocyst must leave the protective envelope before the implantation (nesting) in the uterus. This natural process is called hatching. This natural mechanism may be disrupted in some cases. It is beneficial to perform assisted hatching before introducing the embryo into the uterus. Assisted hatching means artificial disruption of the outer envelope of the embryo. Current laser technology can gently thin the embryo's envelope, or completely disrupt it. It is performed in embryos with a stronger outer envelope (zona pellucida hardening).

MESA or TESE is indicated when no sperm cells area repeatedly found in the ejaculate. The cause may be an obstruction in the sperm ducts at the level of the epididymis or reduced sperm production in the testicles. The disorder can be either congenital or acquired during life. MESA surgery consists of puncture sampling of the contents of the epididymis ducts.

We can freeze germ cells (oocytes, sperm) or embryos that are created by fertilising eggs with sperm. We freeze female and male gametes before therapeutic procedures associated with a risk of damage to the gametes due to drugs or radiation, in order to maintain fertility. It is also possible to have germ cells frozen for personal reasons, for example, due to the absence of a partner during the treatment of a woman. After the introduction of an embryo into the uterus during in vitro fertilisation, all remaining promising embryos are frozen. Embryos can be frozen at all stages of development. Most commonly, we freeze embryos at the blastocyst stage. The freezing method is a process called vitrification. These frozen cells and embryos can be stored for many years.

Embryos that have been frozen can be thawed and used for a new transfer into the uterus. 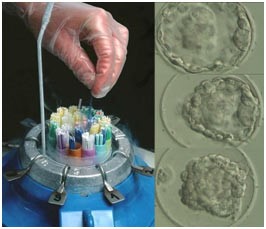 The DNA contained in the head of the sperm must be in order so that the sperm cell is able to properly fertilise the egg. Sperm with damaged DNA is able to fertilise an egg, but it may lead to the inability of the embryo to nest in the uterus or miscarriage. Causes of impaired DNA integrity include increased testicular temperature in varicocele or fever, exposure to reactive oxygen species, metabolic consequences of overweight or diabetes, smoking, the use of certain medications and age. Approximately 25% of infertile men have an increased incidence of fragmented DNA sperm, although many of them may have normal baseline spermiogram parameters. The examination is therefore suitable for all men who have tried to conceive a baby with their partner for a long time, especially in cases with an unclear cause of infertility. 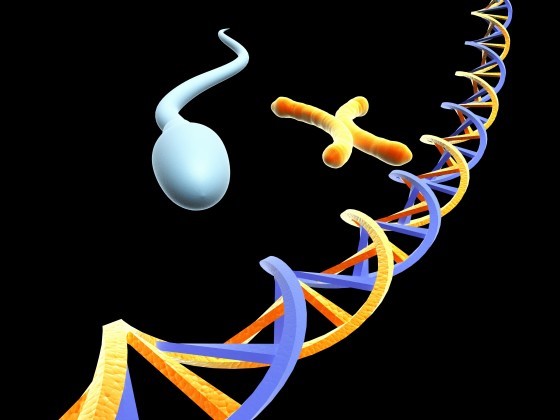 Continuous monitoring of embryo development during culture (PrimoVision or Geri)

Time Lapse Incubator PrimoVision/Geri enables culture and monitoring of embryos at the same time. This revolutionary device allows us to monitor embryonic development 24 hours a day and record video without disturbing the optimal environment. Continuous monitoring will allow the embryologist to sufficiently assess the whole development and provide sufficient information to select the most suitable embryo for use. Incubators enabling monitoring of the development of embryos have been used in embryological laboratories for a long time, but the existing camera systems did not allow for the culture in mini-incubators – cells with the culture dish and a camera for embryos of each patient separately. International studies confirm that time-lapse monitoring of embryo development can help better compare embryos that look the same at first glance. Such embryos could have grown quite differently – one could have a uniform cellular development and the other not, suggesting their different chances of nesting and future pregnancies. 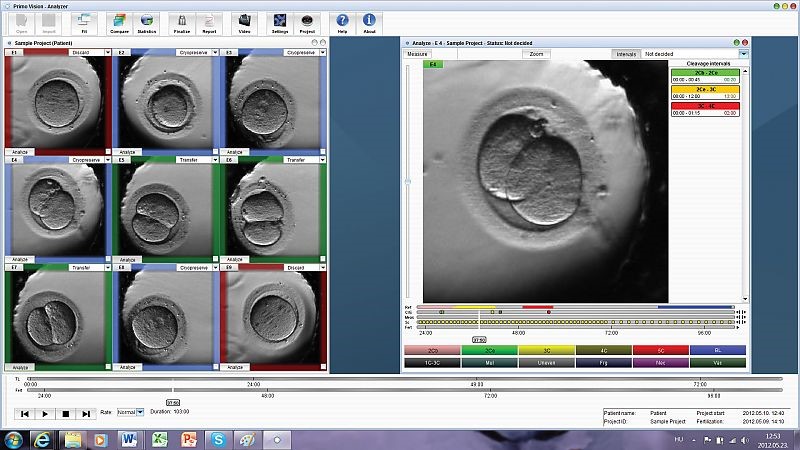 Assisted reproduction currently has to manage the steady increase in the age of couples wishing for their first offspring. This is largely reflected in the genetic quality of the embryos, and the prognosis for IVF success is usually lower than in younger couples. Such couples, and in general couples who repeatedly fail to conceive, suffer repeated miscarriages, where the male partner has abnormal spermiogram parameters, etc., may benefit from so-called preimplantation genetic screening. In this method, the genetic information of the embryo is determined before it is introduced into the uterus. The genetic examination itself is preceded by a sampling procedure reimbursed by health insurance. 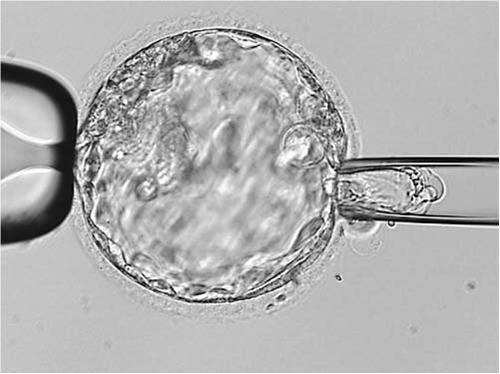 In some cases, the infertility of the couple is caused by a specific genetic disease or chromosomal abnormality. In these cases, it is important to design suitable preimplantation genetic testing of embryos, which will allow the selection of only a healthy embryo for transfer, without this genetic disease. 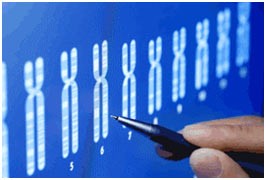 Due to the unfavourable demographic development in European countries, with increasingly more women postponing pregnancy to older age, the number of women with a very low chance of conceiving with their eggs due to their high age is increasing sharply.

The donor egg programme is a good treatment alternative for them due to its high success rate.

Treatment with a donated egg is also suitable for women after oncological treatment, women with a genetic disease or in repeated unsuccessful attempts at in vitro fertilisation using their own eggs (IVF cycles).

The method requires the synchronisation of the donor’s and recipient’s cycles. The egg donor undergoes ovarian stimulation, and the recipient endometrial stimulation.

The Sanus Centre for Assisted Reproduction has achieved considerable fame in this field at home and abroad and is one of the major care providers in this area.

Women who donate eggs for the treatment of another infertile couple must meet the following criteria:

A woman who applies for the treatment with donated eggs can choose a suitable donor according to her phenotypic characteristics (eye colour, hair colour, height, weight). It is also possible to provide information about the donor's blood type.